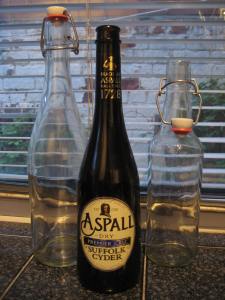 Ok, this is isn’t actually a witch bottle.  It’s a twenty-first century cider bottle.  But when I saw it, with its quirky slanting neck evocative of a bygone time, I was suddenly reminded of a photograph I had seen of an eighteenth-century witch bottle found in Dorset, and I was determined that I would save it from the recycling box and give it a home in the only place I could think of; my kitchen windowsill.

England was by no means a victim of the great witch-hunts experienced on the Continent during the early-modern period, when a combination of social and economic pressures, religious upheavals and changing systems of criminal procedure created a ‘witchcraze’ that resulted in the death of over 40,000 so-called ‘witches’.  England did not conform fully to the continental concept of witches being in league with the devil, and this, combined with a strong central authority and restrictions in the use of torture, meant that it experienced relatively few witch trials.

That is not to say, however, that belief in witches and witchcraft did not exist in England.  With the exception of diabolism, the English shared many of the popular beliefs of their European counterparts.  Among the illiterate peasants, magic was used as a means of protection, though it could also be used to cause harm (maleficia).  Witch bottles are artefacts that allow us to gain a better understanding of these practices and the beliefs that underpinned them.

Though not a common archaeological discovery, witch bottles are instantly recognisable; they need not be specifically glass bottles (like the one from Dorset), but are usually a vessel of some form, often made of pottery (these are called Bellarmine jugs).  Some are plain, some decorated with strange faces and pagan symbols such as the daisy wheel (both of which can be seen in the photograph above).  But it is the contents that are most intriguing.  Items may have been solely intended to represent the owner (various means of protective magic attempt to ‘fool’ demons or absorb ill-will in this way), such as hair, finger nails, blood and urine (the latter being discovered following tests on the Reigate witch bottle), though there may have been a more sinister motive, which seems likely given the frequency of bent pins or items such as a heart-shaped piece of material stabbed with pins (as was the case with one rescued from the River Thames in London in 1926), clearly intended to cause harm to another.

For the article on the Dorset witch-hunt (including the photograph I was reminded of), see this BBC News article, for the Reigate witch bottle see this Current Archaeology article

Finally, for the actual producers of my cider bottle (also available in some supermarkets), go to Aspall Cyder