Like any tourist, I love the iconic sites of London – Trafalgar Square, Buckingham Palace, Horseguards, Westminster Abbey, the Houses of Parliament, St Paul’s Cathedral and the Tower of London.  But each time I visit, I delve a little deeper into the side streets and explore a little further afield.

In particular, I’ve fallen in love with the South Bank, with its riverside views, vibrancy, food markets and street entertainment.  It was when mooching around Bankside on my way east from Shakespeare’s Globe and the replica of the Golden Hind that the path veered from the Thames and took me along Clink Street, famous for the prison from whence the term ‘in the clink’ originates.

During the redevelopment of the area in the 1980s a discovery was made, and it was with similar surprise that I, too, first encountered the remains of Winchester Palace, established in the twelfth century as a London residence for the Bishop of Winchester, then Henry de Blois (brother of King Stephen), and continuing to be in use until the seventeenth century.

The remains are fairly limited in comparison to what would have been an extensive set of buildings and gardens, but they are worth a pause nevertheless, which me and my friend did on a recent visit, taking the time to discuss and take photographs of the key architectural features of this urban ruin.  Stood on Clink Street, you’ll find yourself looking down into the floor of the vaulted cellar, which would have had a passage to the Thames to allow easy access for the delivery of goods. 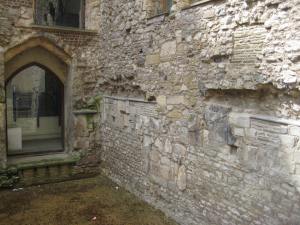 Above it would have been the Great Hall, the focal point of any medieval castle or palace, where a succession of Bishops would have dined with great extravagance, entertaining notable guests (including James I of Scotland and his bride Joan Beaufort), and the three arched doors on the west wall would have allowed access to a pantry, kitchen and buttery (the latter storing bottles of beer and wine, not butter as you, like me, may have presumed!). 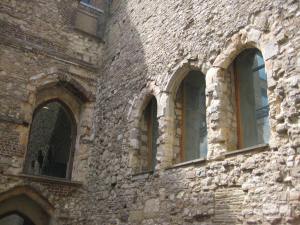 Above is the most impressive remnant of the Hall, a stone-latticed ‘rose’ window, considerably well-preserved given the fact that it was hidden for centuries, now set against a back-drop of the modern brick and glazing of the surrounding apartments and offices.

With a campaign underway to install a sunken medieval garden and to highlight its key architectural features through sensitive flood-lighting, the remains of Winchester Palace should continue to surprise and delight tourists and residents alike.

Meanwhile, having paused long enough, it was onwards to Southwark Cathedral for us …

For more information on the work of the Bankside Open Spaces Trust, who are campaigning to install a sunken garden in the remains, visit its website