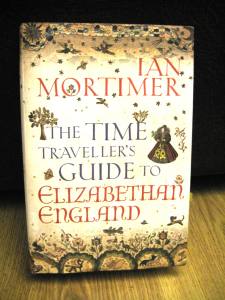 I had been looking forward to watching the first episode in BBC2’s new series ‘Time Traveller’s Guide to Elizabethan England’, based on the book by the same title by Ian Mortimer.  I received the latter as a gift from a friend last year and found it extremely interesting, allowing the reader to gain a better understanding of what everyday life was like for individuals from all classes of society in the second half of the sixteenth century.  And it certainly wasn’t romantic.  Life was a struggle; difficult, violent and short.

I was pleased to see that Mortimer was the presenter in this series, allowing him to bring his well-written, engaging guide to the screen personally, rather than relying on the credentials of better-known historians or presenters, as has become the tendency.  The programme had the potential to be extremely entertaining, but, in truth, it didn’t quite meet my expectations.  Perhaps it was that I had already discovered many of the interesting intricacies of Elizabethan England through reading the book (and a recent article in the BBC History magazine), so that it may have been more insightful for those encountering this ‘travel guide’ for the first time.  For example, he highlights the relative poverty of the average worker, who would have needed at least a day’s wages in order to purchase a single chicken, and reveals the idea that the Elizabethans were unclean to be a myth (though, of course, to our standards we may continue to consider them to be so, despite their – and Mortimer’s – best efforts).

I think the main issue was with the style, which, despite some good work from the graphics department, did not really bring to life the scenes Mortimer described, and the pace and tone lacked enthusiasm at times, too.  Nevertheless, I will be watching again and, perhaps, lower expectations and a familiarity with the format will allow me to appreciate better the next instalments.

Information about this series is available on the BBC website, and for a limited period it can be watched on iplayer

Ian Mortimer’s book ‘The Time Traveller’s Guide to Elizabethan England’ is available from bookshops or online, such as from Amazon

One thought on “Review: Time Traveller’s Guide to Elizabethan England”