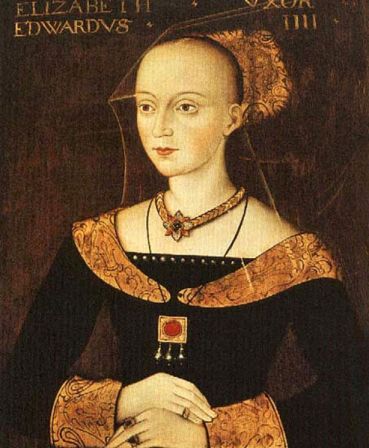 And so a new dramatization has started on BBC.  Yes, it’s based on the novels by Philippa Gregory, but it’s also, beneath the literally licence, inspired by historical events, so I thought it only fitting to write a brief biography of the White Queen herself – Elizabeth Woodville.

Legend has it that, in 1461, widow Elizabeth Grey (nee Woodville) was with her two sons under an oak tree near her home at Grafton in Northamptonshire waiting for Edward IV to ride past (she intended to ask for some land to be restored to her).  He stopped, and was so taken with her that he begged her to be his mistress.  It was believed that on one occasion she had to fend off her insistent admirer by putting a dagger to her own throat.  Neither of these stories can be substantiated, but they’re romantic nevertheless!

On his way to (or possibly from) battle, Edward married Elizabeth in secret at Grafton with her mother as a witness, the latter facilitating clandestine meetings between the couple in the months that followed, until he was forced to reveal his marriage to the Royal Council.  No doubt they were shocked!

Elizabeth was not a popular choice as Queen.  She offered none of the diplomatic nor financial benefits that resulted from an alliance with a European royal family.  Her mother, Jacquetta, was from a noble Luxembourg family, and had been married to the Duke of Bedford as a teenager, but on his death she had married his squire, Sir Richard Woodville, in a love match that defied the marriage conventions of the time.

Furthermore, the Woodvilles were of questionable loyalty at a time when England was experiencing the so-called Wars of the Roses, which refers to the ‘white rose’ of York and the ‘red rose’ of Lancaster (one branch of the royal family fighting against another).  Elizabeth’s family had been committed Lancastrians, supporting King Henry VI (who was still alive, though of questionable sanity).  Edward IV was a Yorkist usurper who had been helped to the throne by the Earl of Warwick, the ‘Kingmaker’.

Despite some animosity towards the new Queen, the marriage would prove a successful one.  The Woodvilles were rewarded with titles, and advantageous marriage alliances were made for Elizabeth’s many brothers and sisters.  More importantly, she bore the King no less than ten children (though not all would survive infancy), thus fulfilling her expected role as a wife and queen.

Yet she also had to endure uncertainty and loss as a result of the bloody Wars of the Roses.  In 1469, the Earl of Warwick and Edward’s younger brother, George (the Duke of Clarence), were involved in a revolt that resulted in Elizabeth’s father and brother being executed (without trial) and Jacquetta was accused of having used magic to bewitch the King into marrying her daughter.  More worryingly, Edward himself was captured.

This was too much even for those who supported Warwick, and he was forced to release the King.  Edward would have been within his rights to have punished Warwick and Clarence, but instead he forgave them.  It is doubtful whether Elizabeth would have felt so conciliatory towards the men who had mercilessly targeted those closest to her.

Edward was wrong to have trusted Warwick, as just months later he rebelled again, and this time the King was forced to flee abroad.  Elizabeth was heavily pregnant, and sought refuge in Westminster Abbey with her mother and her daughters, and there she gave birth to a son and heir, who she named after his father, and who became Prince of Wales.  Yet, temporarily, she found herself a displaced queen, as the wife of Henry VI, Margaret of Anjou, invaded England and restored the Lancastrian King to the throne.

Having built up support abroad, Edward returned to retrieve his kingdom.  Warwick was killed in battle, Henry VI ‘conveniently’ died in the Tower of London and Margaret of Anjou returned to France.  Edward had been supported throughout by his loyal youngest brother, Richard, Duke of Gloucester (but more about him later!).  Elizabeth was reunited with her husband, and another son followed (also named Richard, who was given the title Duke of York).

There followed some years of relative peace, although the misdemeanours of Clarence resulted in his execution in the Tower of London in 1478 (reputedly, he was drowned in a vat of wine).  Edward IV took ill and died in 1483, and the years that followed were arguably the most tumultuous period of Elizabeth’s life.

The 12-year-old Prince of Wales became Edward V and arrangements were made for him to be escorted from Ludlow Castle (on the Welsh border) to London by Elizabeth’s brother and one of her Grey sons.  However, the two were interceded and imprisoned (later executed) on the way by Richard, Duke of Gloucester (not such a loyal brother now!), who then proceeded with his nephew to London.  The young King was housed in the Tower of London to await his coronation.  Sensing danger, Elizabeth fled into sanctuary at Westminster Abbey once again, with her five daughters and the young Duke of York.  Reluctantly, Elizabeth was persuaded to give up her younger son, who was sent to join his brother at the Tower of London.

Soon, legislation was passed that declared the two princes to be illegitimate (the late King had apparently been promised to another before he married Elizabeth Woodville), and the Duke of Gloucester was proclaimed King Richard III.  By this time, the boys had been seen less frequently around the confines of the Tower of London, and when they disappeared it was presumed by many that they had been murdered.  The blame for the supposed smothering of the ‘Princes in the Tower’ rests with their uncle, Richard III.  However, the evidence is not entirely convincing, and Elizabeth came out of sanctuary and even appeared at court during the years of her brother-in-law’s reign, which would be unusual if she suspected him of having had any involvement in the deaths of her two sons.

Richard was defeated by his rival, the Lancastrian Henry Tudor, at the Battle of Bosworth in 1485.  The new King (as Henry VII) married Elizabeth Woodville’s eldest daughter, Elizabeth of York, thus ending (at least in theory) the rivalry between the warring houses.  Elizabeth may have had a falling out with her son-in-law (who was heavily influenced by his own mother, Lady Margaret Beaufort), as she spent the last years of her life in relative obsurity at Bermondsey Abbey.  She died in 1492 and was given a low-key funeral and laid to rest alongside Edward IV in St George’s Chapel at Windsor Castle.

Elizabeth’s legacy lived on through her ancestors; her grandson was Henry VIII, and as such she was great-grandmother to his children Edward VI, Mary I and Elizabeth I; and her great-great-grandaughters were Lady Jane Grey (who descended from Elizabeth on both her mother’s and father’s side) and Mary, Queen of Scots (and, as such, the subsequent Stuart monarchs).  She led, I think you’ll agree, a very interesting life, at the very centre of the Wars of the Roses, though beyond these facts we know very little about the real Elizabeth Woodville.

The main source for this article is David Baldwin, ‘Elizabeth Woodville: Mother of the Princes in the Tower’, available in libraries, bookshops and online (for example, at Amazon)

Elizabeth is a central character in the new BBC drama ‘The White Queen’, an adaptation of the Philippa Gregory series of novels collectively called ‘The Cousins’ War’ – the webpage is here, and can be seen on Iplayer for a limited time