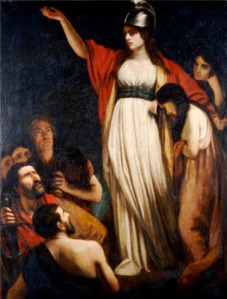 ‘She was tall and terrible, with a great mass of red hair to her hips.  She wore a twisted torc and a tunic of many colours … She carried a spear to instil terror in all who saw her.’  Dio Cassius.

The Romans had landed in Britain in 55 and 54 BC, when Julius Caesar, then Governor of Gaul, undertook two expeditions there, following which the native Britons began to pay tribute to and trade with Rome.

Ninety-seven years later, in 43 AD, the Emperor Claudius sent four legions to Britain under the command of Aulus Plautius. They crossed the Channel, landing in Kent, and through a series of skirmishes, battles and sieges, Roman control was established around the Thames.

Claudius himself then made his way to Britain, and took Colchester (named Camulodunum by the Romans).  Eleven kings of the Britons surrendered to him, and he returned in triumph to Rome.  The Senate gave him the title Britannicus (British).

He had ordered Plautius to ‘take the rest’, and the Romans went on to conquer much of Southern England, taking key strongholds (such as Maiden Castle in Dorset) as far west as Devon, mainly through the work of the commander Vespasian (a future Roman Emperor).

One of the eleven kings who had capitulated to the Romans was probably Prasugatus, King of the Iceni tribe which was based in East Anglia.  His wife was Boudicca.

Boudicca was born between the years 25 and 30.  She is described by Dio as ‘a Briton woman of the royal family’, though it is uncertain whether she was born into the Iceni or a different tribe.

The Iceni were spiritual, cultural (as their artwork attests), farmers, though the Romans saw them as primitive and warlike, with blue-painted skin and spiked lime-streaked hair.  Men and women were treated as equals (a shocking concept to the Romans and, later, to the Christians).

Archaeology associated with the Iceni is scarce, but includes coins and gold borcs (necklaces), and they were strongly associated with horses and chariots (which had ceased to be used amongst the Romans, with the exception of entertainment purposes).

Prasugatus died in 59/60 AD, and he left a will which bequeathed half his kingdom to his two daughters (who were probably aged around 12 and 13 years old) and the remainder to the Emperor Nero.  The Romans did not honour this division, as Tacitus describes:

‘Kingdom and household alike were plundered like prizes of war … The Icenian chiefs were deprived of their hereditary estates as if the Romans had been given the whole country.  The king’s own relatives were treated like slaves … As a beginning [Prasugatus’] widow Boudicca was flogged and their daughters raped.’

This violent, heavy-handed repression of the Iceni led to ‘the most serious attack on Roman power the empire had ever seen from within’ (Trow, 2003).

Boudicca called upon the pagan gods for assistance, and gathered a force of 12,000, according to Dio, who also records her (when he wrote two hundred years later) as having said:

‘You have learned by actual experience how different freedom is from slavery … and you have come to realise how much better is poverty with no master than wealth with slavery … let us, I say, do our duty while we still remember what freedom is, that we may leave to our children not only its appellation but also its reality … Have no fear whatever of the Romans; for they are superior to us neither in numbers nor in bravery.’

First, the Iceni destroyed Camulodunum (Colchester), which had emerged as an important Roman centre,  They invaded from the north, advancing on the town quickly, where they set fire to the buildings and slayed the citizens as they tried to flee or attempted to retaliate.  The Temple of Claudius was burned, too, and the head of a bronze statue of the Claudius was thrown into the River Alde in Suffolk (to be found by archaeologists centuries later).

The Governor, Paulinus, was suppressing the Druids in Mona (Anglesey) when he learned of the uprising.  He rode 250 miles, reaching Londinium (London) before the Iceni, who had delayed for some reason.  Paulinus made the decision to abandon it.  Some of the citizens left with the army, others stayed, and were likewise slaughtered and their homes and businesses burned by the invaders.

Boudicca then marched on to Verulamium (St. Albans), which was home to the Catuvellauni tribe (who were becoming increasingly Romanised), rivals to the Trinovantes who were marching with the Iceni.  Verulamium, too, was destroyed.

According to Tacitus, the combined deaths from these three cities was 70,000, though this was probably an exaggeration.  There are few human remains in the archaeological record to allow any confirmation as to the scale of the death toll.

The Iceni then marched north, where they met the forces of Paulinus, most likely at Mancetter (or Manduessedum in the Celtic language) in Warwickshire.  The two armies faced each other at the River Anker.  Boudicca’s troops used horses and chariots, and had brought with them their women and children, who, once it became clear that the Romans had the upper hand, fought, too, but were killed or taken as slaves.

Tacitus describes the battle as ‘a glorious victory’, which resulted in Paulinus suppressing the Britons, who were ‘savaged with fire and sword’.

Boudicca is recorded as having poisoned herself, possibly alongside her two daughters.  She had probably gone on the run, but would have been aware that they would be sought out and punished.  There is no grave, and it is likely that she was cremated, as was customary amongst the Britons.

The main source for this article is M. J. Trow’s book ‘Boudicca: The Warrior Queen’ – available in libraries, bookshops and online retailers, such as at Amazon

One thought on “Boudicca”