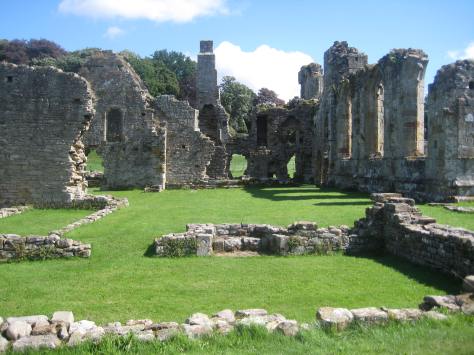 In case you didn’t know already, I have a thing about monasteries.  Walking in the footsteps of ‘the habited’, in the solitude it’s easy to imagine the religious regulation of these thriving medieval institutions, and to wonder at the untold effect the Dissolution had on such communities – musings all wrapped up in a kind-of Victorian fascination with ‘romantic ruins’.

For some years I have wanted to walk the circular route from Richmond to Easby Abbey, and when my other half and I undertook it a few weekends ago, it surpassed our expectations, the site being far more extensive than I had previously imagined.

The start point is the Station in Richmond, a wonderful community centre which includes a swimming pool, cinema, art exhibition space, and restaurant.  From there we walked along a tree-lined country lane that was previously the railway track, and soon we caught glimpses of the abbey across the fields.

Some way along the track, a disused railway bridge crosses over the fast-flowing river below, and (not before recreating the ‘traaaaaiiiinnnnn!’ scene from the film ‘Stand by Me’) we continued through the woodland on the other side, accompanied by the sounds of the roaring river below. 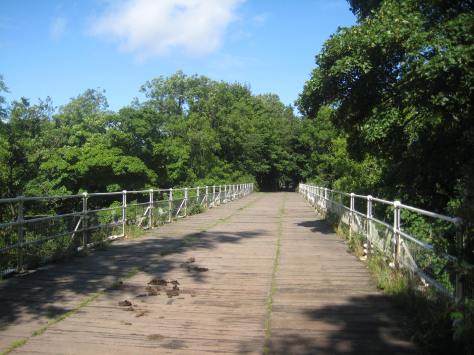 Then the first part of the abbey appeared, and seemed to confirm my misinformed presumption that this had been a considerably smaller religious house compared to its North Yorkshire companions at Fountains and Rievaulx. 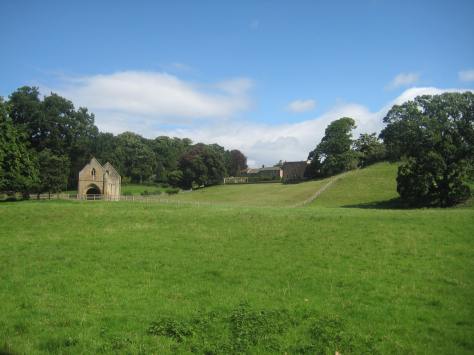 The abbey precinct would have been surrounded by a high wall, and this building was the old gatehouse.  There, the porter would have permitted access to visitors, distributed leftover food to the poor, and closed the door each night. 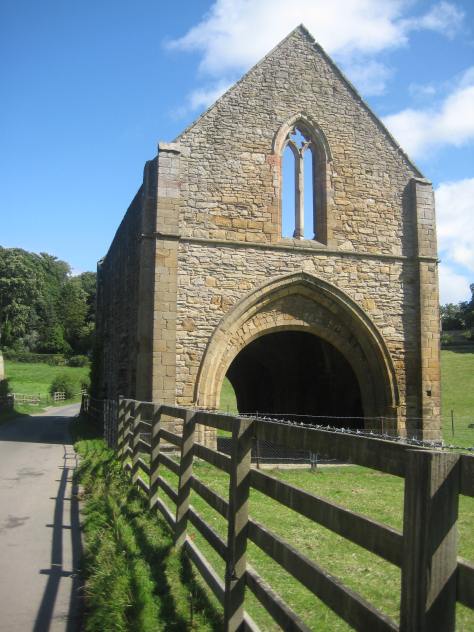 Across from the gatehouse is St Agatha’s Church.  This predates the abbey, as it is believed to have been built before 1100.  Inside is a replica of an early Christian cross dating from the year 800, the original having marked the site as holy before a church had been erected (it is now at the Victoria and Albert Museum in London).  We did not enter the church, however, so as not to disturb the Sunday service being conducted within. 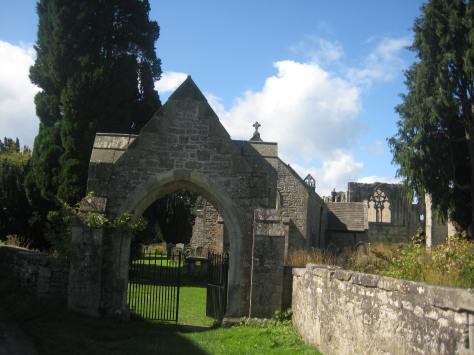 During the Middle Ages, Easby was known as the Abbey of St Agatha by Richmond, and it was founded in 1152 by Roald, the constable of Richmond Castle.  It did not house monks, but regular canons from the Premonstratensian order.  These were communities of ordained priests who lived together.  They were known as the White Canons (on account of the colour of their habits).

Skirting around the church, it is only then that we became aware of the true extent of the abbey remains.

We start with a visit to the refectory, which is the most complete part of the abbey.  It was built in the late twelfth century, and rebuilt a century later to accommodate larger windows.  The undercroft was used for storage, whilst above the monks would have taken their meals in silence.  The abbot’s table was most likely located below the great east window, and at this far end the scriptures would have been read aloud during meals.  The food would have been prepared in the adjacent kitchen, though only the fireplace remains to indicate its location. 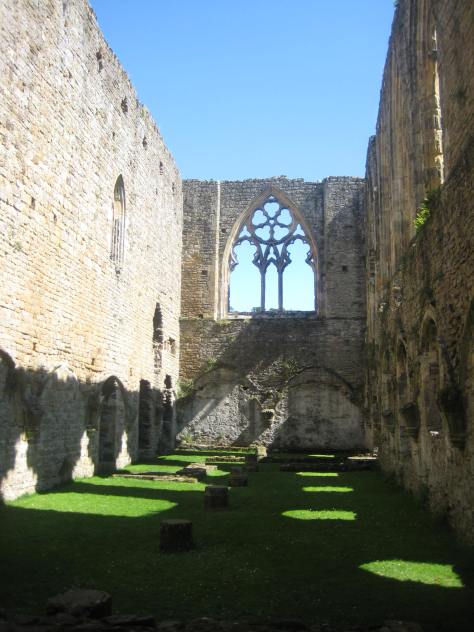 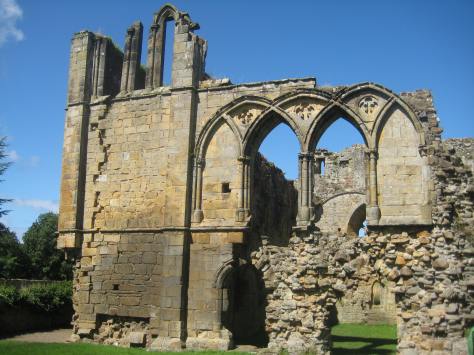 We moved to the outer west range.  The first floor was probably a guest house, whilst the lost upper floor was likely to have been a dormitory.  The leaning section to the left housed the drains of the latrines, as monasteries tended to be comparatively advanced in terms of sewerage arrangements.  At the far end was a warming house where a fireplace was permitted for use by the canons, a rare luxury in their austere lives. 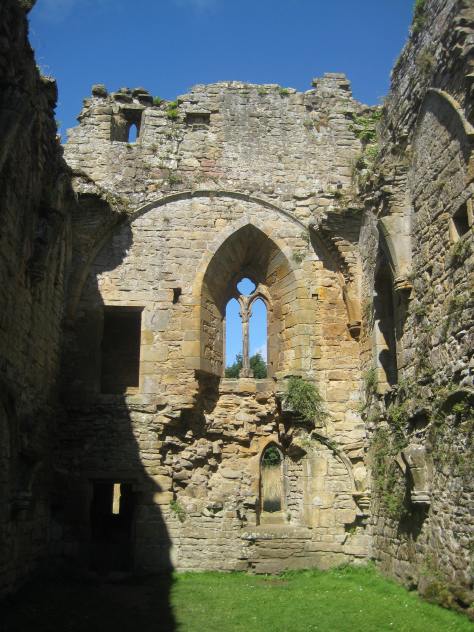 Despite the proximity of St Agatha’s, on a daily basis the canons would have used their own abbey church, which dates from the twelfth century, though it was enlarged in the fourteenth century.

The cloisters have not survived, with the exception of the lower course of stones, now level with the grass.  Around this ‘square’ covered walkway would have been the library and the chapter house, where the canons gathered to discuss their daily business. 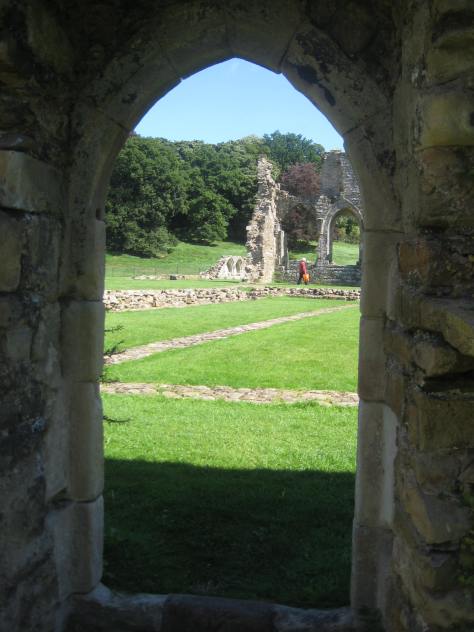 The group of buildings to the north are believed to be the infirmary, kitchen, guest accommodation and other domestic rooms.

The canons were involved in the Pilgrimage of Grace of 1536, a rising against Henry VIII’s religious changes, in particular his closure of the ‘smaller’ monasteries.  The rebels were defeated, and in February 1537 Henry orded that the canons at Easby ‘be tied up without delay’.  Presumably, then, they were hanged.  The Scrope family of Bolton had long been the patrons of the abbey, and they took over the estates after its suppression.  It was from this time that the buildings fell into ruin, and were painted centuries later by J. M. W. Turner.

Having explored fully, we continued on the circular route, walking through a pasture where sheep were grazing, and then along a narrow path running parallel with the river.

Some way along we reached ‘the drummer boy’s stone’.  This relates to a local legend based around a supposed tunnel that runs from Richmond Castle (or market place) and Easby Abbey, built as an escape route in the event of Scottish raids.  The story goes that a drummer boy was sent into the tunnel, and the other soldiers marched above, following the route by the sound of the steady beat.  Here, ‘the sound of his drumming ceased and he was never seen again’. 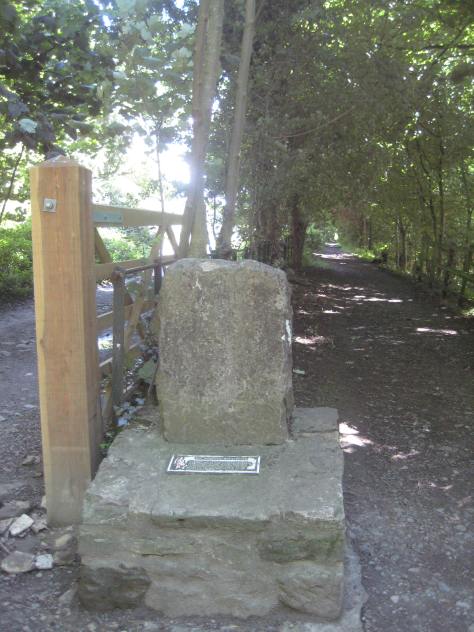 Presently, we spied the great keep of Richmond Castle through the trees, and the track looped round towards the town.

Finally, we arrived at the stone bridge adjacent to the Station, which marked the completion of our circular walk to Easby Abbey.

The sources used for this articles were the plaques at the Abbey, which is maintained by English Heritage

The photographs are the author’s own.  The picture by Turner is in the public domain (via Wikipedia)