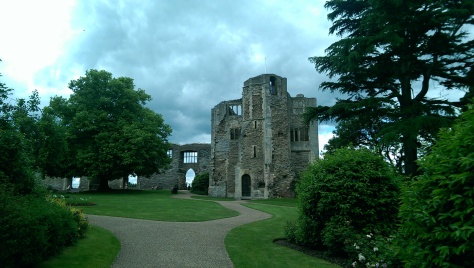 The remains of Newark Castle are by no means extensive, but are a picturesque and quiet retreat in this bustling Nottinghamshire market town, a role that is a far cry from the castle’s turbulent past.

The site has been the location of a fortification since Saxon times, but was modified into a motte and bailey earthwork castle in 1073 by the Normans, and later rebuilt in stone by the Bishop of Lincoln between 1123 and 1133.

The riverside curtain wall was rebuilt around 1300, adjoining a timber building which housed the Great Hall (for dining, with bedrooms above) and the Bishops’ Hall (for entertaining special guests).  In the fifteenth and sixteenth centuries new fireplaces were installed and the windows enlarged and glazed, indicating the changing use of the castle from a fortification to a comfortable residence.

The north curtain wall was three metres thick, housing small rooms and passages.  Visitors to the castle would have passed over a moat, through the gatehouse, and encountered a courtyard, around which buildings such as the kitchen and chapel were located.

The gatehouse is comparably well-preserved, and is a reminder of just how formidable the castle would have been during the Middle Ages.  It housed the bishop’s private apartments, and was most likely the location of King John’s final agonising night, allegedly having been poisoned in October 1216.

When the gatehouse was built in the twelfth century, it had three arched windows, the outline of which can be seen beneath the two Tudor windows, whilst the original stone on the northern wall was replaced by newer masonry when the castle was refurbished in the thirteenth century.

The castle was an important royalist stronghold during the English Civil War, and withstood three sieges by Parliamentarian forces, though the gatehouse suffered some damage during these assaults.  Charles I ordered the castle to surrender in 1646.  Fortunately, instructions issued by the victors to destroy the castle were not obeyed, though it did fall victim to pillaging.

The North West and South West Towers were added in around 1300, in a similar multi-sided design as Edward I’s Welsh castles, whilst the riverside curtain wall was rebuilt in the contemporary decorative style of stonework in two different colours.

The remains of the Watergate, through which supplies were taken from the river to an undercroft, or large cellar, can be seen at the base of the curtain wall.

As part of the Edwardian Reformation (1547-1553), the castle passed from Church to private ownership, and during the Elizabethan era was owned by William Cecil, Lord Burghley.

Despite its deteriorating state, the castle passed from owner to owner until the nineteenth century, when its grounds housed both a cattle market and public baths, and later a library.

To commemorate Queen Victoria’s Jubilee, the grounds were landscaped into public gardens, and opened in 1889.  Recently, the gardens were refurbished and a band-stand added, completing the original Victorian design, whilst commemorating the castle’s past and cementing its important role in the present as a park and outdoor venue. 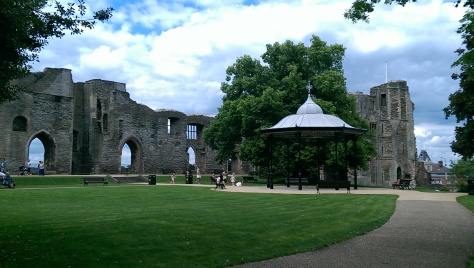 The sources used for this articles were the plaques at the castle, and the Newark Castle and Information Leaflet available on the Newark and Sherwood District County Council website.

The photographs are the author’s own.